There's a water meter inside my apartment. In France, sometimes they don't put meters outside, where you'd expect to find them; instead they are inside a residence, which means that meter readers must periodically enter the residence to read the meter, which means that somebody has to be there to let them in. It's a very bizarre arrangement. My electric meter is outside, so that can be read without entering the apartment, although the electric company usually “estimates” my consumption (by taking the real consumption and tripling or quadrupling it) instead of actually coming out to read the meter.

Anyway, the water meter is inside the apartment. Years ago, the company that runs these meters, which is apparently called ista-CIS (I'm not sure, as it has only been identified to me as “CIS”) installed electronic meters that magically transmit their readings to some central point, so that nobody has to come into the apartment. Which was great as far as I was concerned.

This electronic meter apparently runs on a battery, which has to be replaced every few years. In February, my syndicat (that's how the French refer to a building management company) sent me a letter telling me to be ready on a certain day for a technician to come out and (apparently) replace this battery. So I took a day off work, losing a day's wages … and he never showed up. There was a note on the wall in the lobby when I got home that said he was “sick” and wouldn't be able to come (I guess this company has only one employee for this task, or something).

A few weeks ago, the syndicat sent another letter that said I absolutely, positively had to let this technician into the apartment to do whatever has to be done to the meter. They said it was defective and had to be replaced, or maintained (the letter wasn't consistent on this point), otherwise I'd be charged a hefty fixed price for water (500 cubic feet per month). The date for his visit was September 2.

I wasn't working on that day (yesterday), so I was there waiting for him. He showed up early. I showed him into what passes for a kitchen in my apartment: a very crowded little alcove with a fridge, an unused washing machine—that's a separate story for some other day—and a sink with a cold-water faucet. He shifted the small washing machine out of the way, and went to work. It only took a few minutes. I didn't keep an eye on him so I'm not sure exactly what he did. 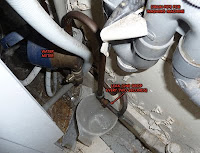 As he was finishing, he said “look, you have a leak.” I walked over and peered into the very crowded space behind the washing machine. Sure enough, at the fitting that connected the output of the meter to the water supply inside the apartment, there was water dripping from the fitting. Beneath it, there was a tiny puddle of water a few inches wide. The fitting dripped at about once every two seconds. I had never noticed any leak before, and it seemed odd to me that something dripping every two seconds would produce such a tiny puddle, but I made a note of it. The technician then put the washing machine back into place and left.

Several hours later, I walked into the kitchen, and the floor was covered with water, which came as a shock. It had been dry that morning. In fact, it was normally dry. I looked behind the washing machine and realized that the leak was dumping water all over the floor. The thing is … there had been no water before the technician came, and I now realized that with a fitting that is dripping every two seconds, there is absolutely no way that it could have been leaking before the technician came, or the kitchen would have been covered with water long ago. Since the kitchen had been bone dry before his visit, and was soaking wet only a few hours after his visit, the appearance of this leak precisely coincided with his visit. I had not previously noticed the leak before he pointed it out to me because there had previously been no leak.

To me it's just too hard to believe that by some magic coincidence this leak decided to spring up at the very moment that the technician was working on the meter … therefore the meter technician must have done something to make the fitting leak. There's just no way that it could have been dripping like that before he came without leaking water all over the kitchen floor (which is exactly what it did in only an hour or two after he left).

So I called the syndicat to tell them that the technician must have broken something, because I now had a water leak in the kitchen. They called ista-CIS, and the technician called me back the next morning (this morning). However, he said that his responsibility was the meter only, and there was absolutely no way that he could have caused a leak. Yes, he pointed the leak out to me, but it wasn't him. Maybe the kitchen was dry before he came and wet afterwards, but it wasn't him. Maybe it was on the fitting that connected the meter to the apartment, but that wasn't his responsibility.

That seemed very difficult to accept, given that I had had no water at all in the kitchen before his visit, and now the leak was flooding the floor. I had to put a plastic cup beneath the pipe (the only thing I had that would fit beneath it), and empty it every two hours to keep water from getting onto the floor. He should have realized this himself, because the floor was dry when he came to visit. But he denied any connection between the leak and whatever he did to the meter.

So I called the syndicat. They said it wasn't their problem, either. They said it was my problem, and it was up to me to pay for repairs. After all, what proof did I have that the ista-CIS technician had caused the leak? I guess a dry kitchen before his visit and a wet kitchen afterwards weren't stufficient proof—or, more likely, they simply assumed I was lying and had taken this opportunity to blame an existing leak on the technician.

It's hard to believe that the technician could deny a connection if the kitchen was dry when he arrived and wet two hours after he left. It's also hard to believe that I would leave something leaking in the kitchen for years, waiting for the once-in-a-decade maintenance visit from the ista-CIS technician just so I could blame it on him. But in France, everyone is assumed to be a liar until proven otherwise, and proving otherwise consists of having the best lawyer.

It's very tiring. Why does everyone in France try to escape all responsibility for everything? Why can't people be honest? Why would I lie about a leak in the kitchen, especially since a sudden leak would presumably be covered by insurance, anyway? How could a technician not see a connection between dry floor on arrival and wet floor after departure? Why not just come back out and fix it? Why is everyone in France so hellbent on shafting his neighbor? It's a weird cultural thing, but it's very fatiguing. Is it the Latin/macho influence? I don't know.

And to compound this all, I'm broke. I won't have anything until the 15th at the earliest. I'm down to my last fifty cents, literally (all I have is what's in my pocket, and in my pocket I have fifty cents). I spent half of my last twenty euro on milk and pound cake, and the other half on the laundromat (if you're wondering why I go to a laundromat when I have a washing machine at home—well, like I said, that's another French-culture story for another day). A plumber would charge hundreds of euro for a leak I didn't cause, and I don't have a credit card or even checks. A lawyer would want several hundred euro per hour.

I still have to try calling ista-CIS one more time, but, it being a French company, I pretty much know how that will go (“Mais non, Monsieur, ce n'est pas nous!”). I may stop by the insurance agent's office tomorrow to see what they can do, against my better judgement, even though that will probably only make things worse (I'm not sure how, but taking any positive action always makes things worse, and of course it's a French insurance company). In the meantime, I have to empty the plastic cup under the pipe every two hours, 24 hours a day.