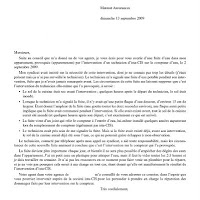 Well, the leak in the kitchen is dripping four times faster than it was last week, when it mysteriously appeared as the water-meter technician did something to the meter.

I talked to the insurance company (Matmut). They said it's not their problem; they only reimburse for water damage, not the cost of repairing leaks. The building management company also says it's not their problem. And ista-CIS, the company that sent the technician who apparently caused the leak, also denies responsibility (through the technician). Apparently I'm expected to pay for repairs, but I have only €36 to my name right now.

I empty the 6-liter bucket I put beneath the leak every three or four hours. It isn't going to hold a full day of leaks once I go to work tomorrow, so there's a good possibility that there will be water all over the kitchen floor (at least) when I get home. At the insurance company's suggestion, I'm sending them a letter (shown here, redacted, in French) describing the leak and its circumstances in the hope that they might be able to compel ista-CIS to fix it. But I'm not optimistic.