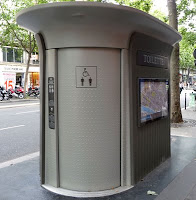 Anyway … a few days ago, while risking heatstroke by going for a short walk through Paris, I came across one of those new sanisettes that I've mentioned before, this one fully installed and operating. I couldn't resist trying it out. It's a vast improvement over the previous generation. It's free, like its predecessor. The door is controlled electronically with elevator-style pushbuttons instead of mechanical levers (although there's a big red lever on the inside for emergency exit, which reminds me a bit of an aircraft door). A recorded voice makes announcements as you enter, use, and exit the sanisette. For example, it advises me that “the door is now closed and locked,” which I suppose is meant to be reassuring, although I can imagine it sending a claustrophobic into a panic.

Speaking of claustrophobia, though, the inside of the new generation of sanisette is very roomy—about half the size of the main room in my small studio, in fact. The main reason for this is that all sanisettes are now accessible to wheelchairs. Apparently the concerns that caused New York to abandon the concept of sanisettes after the wheelchair lobby insisted that they all be accessible have not been an issue for the City of Light. I cannot help thinking that this new generation will probably be especially appreciated by low-cost prostitutes and drug addicts, with its interior roominess, but we shall see.

The toilet inside the sanisette looks more conventional with each generation of the gadget. So does the sink, which now looks the way a sink should look. It's still equipped with the automatic sensors that turn on the soap and water when you put your hands over it, and it still has the hot air fan to dry them (more or less) after they are washed. There's a larger mirror to one side of the sink as well. And the toilet has two buttons, one for a “little flush,” and one for a “big flush,” in keeping with current European water-saving practice (in the previous generation of sanisette, the flush was always the same, and occurred after you left the sanisette, during the cleaning cycle).

The outside of the sanisette looks nicer now, and there are multiple indicator lights to tell you what it's doing. Green means it's available, yellow means it's occupied, blue means it's in its cleaning cycle, and red means it's out of order. Right now, all the new sanisettes are spotlessly clean and in perfect working order; we shall see if they remain so after several months of abuse by clueless tourists and vandals. The instructions are now in multiple languages (including braille), so perhaps that will help prevent the former group from doing damage, although tourists can be really stupid.

The sanisette even has a sink on the outside, for washing hands I suppose. It's not marked to indicate that the water from the faucet is potable (the inside sink explicitly indicates that the water is not drinkable), so it's best to assume that it's not.

That last part deserves a bit of explanation. Paris has two municipal water supplies, one of which provides safe drinking water, and one of which provides reasonably clean water that isn't intended for drinking. This is more environmentally sound than pumping drinking water everywhere for every purpose. Outdoor faucets that let you wash your hands usually provide only the reasonably clean water, not drinking water. The exception is Wallace fountains, which do indeed dispense drinking water (in a continuous stream, no less—which seems very wasteful to a former desert dweller such as myself).

In fact, Paris hires technicians to taste and smell the drinking water, in order to make sure that it has no strange taste or odor, in addition to being safe to drink.

But I digress … anyway, this new sanisette is very nice. Even my mom would like this sanisette. I hope they don't get too beat up by the population (cf. Vélib' bicycles, which are being vandalized and stolen at record rates).

And speaking of digressions … on my walk through Paris-turned-inferno, I was once again struck by the vast number of smokers in front of just about any building containing offices. It amazes me that drug addicts such as smokers are entitled to five times as much time off during the day as non-addicts, simply so that they can yield to their addictions. A significant number of French people who smoke have wisely welcomed the recent total ban on public smoking as an additional incentive to quit, but a hard core of tobacco dopers continues to smoke, and instead of abstaining at work, they just spend even more of their employer's money puffing like junkies out in broad daylight, in front of the building. At some places you literally have to work your way through a cloud-ensconced throng of cigarette addicts just to get to the front entrance. It's pretty disgusting.

Eventually the heat got to me and I returned home, after trying to cool off with some ice cream. I was very disappointed to see that the excellent ice cream shop in the Latin Quarter (Tutti Sensi) has closed. I can't imagine why, since purveyors of inferior ice cream in the same area (Haägen-Dazs, Amoretto) seem to be doing well, especially with the ever-increasing temperatures in Paris. I hope the one up in Montmartre (La Butte Glacée) is still there; I haven't been up there lately.

The yearly summer carnival in the Tuileries gardens has arrived. They have great granités (a bit like snow cones, but with the syrup actually frozen into the ice) and gyro sandwiches there.