All quiet on the Parisian front

Today is the last day of July, and is typically one of the quietest days of the year in Paris, thanks to the mass exodus of Parisians on summer vacation during July and August.

In the olden days, Parisians abandoned the city (almost literally) during the month of August specifically, which they spent at their second homes or on the beach. In modern Paris, this tradition has greatly mellowed, and now Parisians take their long French vacations (six weeks is the legal minimum per year) sometime between the start of July and the end of August. The period between mid-July and mid-August seems to be the quietest time of the year these days—the time when the greatest number of Parisians are out of town.

It's no longer a total abandonment of the city, either. Again, in the olden days, just about everything shut down during August, but that's history now. There are quite a few small shops—especially family-run boutiques and bakeries, and other small businesses—that close for two weeks or so (not a month any more) between July and August, but just about all other businesses remain open. These means that there's less traffic and no pollution, and no crowding on the Métro, but there are still things to do, because they don't just roll up the sidewalks the way they used to. 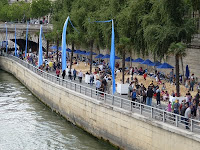 During much of the day, there is little or no sound of traffic outside my window, and I live near a fairly busy street that usually has traffic practically 24 hours a day. It's pleasant. There is still some summer construction work going on in my street, so I occasionally hear construction noises, but for the most part it's quiet. At night, it's completely silent, which is a little bit eerie.

The weather has been up and down. One day it's hot, the next day it's seasonal. We've been pretty lucky most of the time, with only a moderate number of brief heat waves. I still find it uncomfortably warm when I go out, but not to the point of risking heat stroke, as I do during heat waves. I hope cooler (i.e., seasonal) weather prevails.

My favorite ice-cream place in the Latin Quarter (Tutti Sensi) is not reopening. It has been converted into another souvenir shop. Thank goodness the original in Montmartre still seems to be going well enough. I love their ice cream.

Lately I've discovered (or rather rediscovered) Subway sandwich shops. They've suddenly appeared in Paris over the last few years, and they offer a welcome alternative to the lame sandwich offerings one sees at most French places. A typical French sandwich is a parisien, which means a couple slices of ham and a few slices of Swiss cheese on a stale, hard French baguette. The sandwiches from Subway are much better. Politically incorrect, but true! Not to say that there are no good sandwiches in Paris—there are, and some places even have long lines in front of them because of their great sandwiches. But the average basic sandwich you buy at a bakery or something is nothing to write home about; it will relieve your hunger, and that's about it.

Paris Plage is operating now; it runs from late July to late August. The expressway is blocked off and the artificial sandy beach welcomes Parisians who aren't leaving the city on vacation for the summer. It seems to be attracting quite a crowd, although I haven't felt a desire to visit (I don't like going out when it's hot). I rather prefer the Tuileries fair, next to the Louvre, because of a certain little restaurant there that serves great gyro sandwiches for seven euro (beyond my normal budget, but sometimes I splurge).