A major heat wave has begun. Yesterday it was 86° F in the little office where I work most of the time, at 8:30 AM. It got worse as the day wore on. By early afternoon, I was exhausted and very sleepy, and I accomplished essentially nothing. I returned home not long after 5:30 PM.


You don’t know how exhausting heat is until you are forced to live in it without air conditioning. But my apartment does have A/C, so at least I can relax and sleep once I get home. And I seem to sleep a lot. 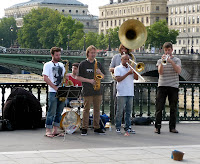 Visitors to Paris still ask if they should look for a hotel or apartment with A/C. The answer is always yes, if they plan to be in the city any time from April to October. Heat waves can occur at any time of year, and when they occur during these months, they tend to bring temperatures that require air conditioning.

I’m not sure why some people insist on avoiding A/C. Are they in the army, or playing some sort of wilderness survival game? Do they really want to be miserable during their entire vacation? Do they really want to visit the emergency room of a French hospital? What exactly is the problem? What is the nature of the taboo that compels them to refuse air conditioning? 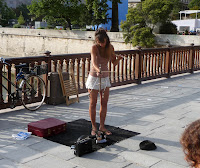 Is it bad for the environment? Well, air conditioning requires a lot of energy—electricity, mainly. But so does heating. And the laws of physics are such that air conditioning is more necessary. The human body produces heat, which must be removed. In cold weather, the heat is removed by the environment. If it gets too cold, simple insulation in the form of warm clothing slows the heat loss and keeps a person safely warm without any need for additional expenditure of energy. But in hot weather, the heat from the body is not lost to the environment, so it must be forcibly removed by active cooling. That active cooling consists of sweating, which only works up to a certain point, and then must be supplemented by active mechanical refrigeration at higher temperatures and humidities.

There’s no way around these laws of physics. No amount of voodoo or wishing can make them go away. And people who think they don’t need to be actively cooled in high heat and humidity sometimes end up in the hospital, or worse. To me the logic is impeccable, but I suppose some people manage to avoid logic entirely.

Other than that, well, not much else. Before the heat really set in, I ran some errands on the way home (a few days ago), and saw some street performers, which I’ve shown here. Both were near the Latin Quarter. One was actually a band, not a very good one, playing on the Arcole Bridge north of Notre-Dame, and the other was a woman manipulating a small puppet on the Double Bridge just south of Notre-Dame, with music by Édith Piaf (“Mon Dieu,” a real tearjerker of a song) playing in the background. You see lots of performers around the Latin Quarter, whenever the weather is tolerable. Some are good, many are so-so, and some are pretty bad.

I notice more and more people taking travel photos with their iPads, which looks really weird, but I guess some people just can't be bothered to bring a proper camera, even for an important trip to a great city. You'd think that a small, normal camera would be easier to drag around than an iPad. Very strange.