Yesterday was a beautiful day. Perhaps today is also a beautiful day, but I haven’t been outside. But yesterday was definitely a beautiful day. People were sitting in groups on the grass at sunset, in the garden areas on the lower side of the Champs, on the large esplanade in front of the Invalides, and on the green belt in the middle of the avenue de Breteuil. I’m sure there were many more on the grass on the Champ de Mars, facing the Eiffel Tower, but my stroll didn’t take me in that direction. The temperature and light were just right for sitting on the grass with friends and socializing. It’s not something I would do, because I don’t socialize much and I fear what might be crawling around in the grass, but it pleases most people, and it’s pleasant to see, even if I don’t participate. Unfortunately, there were a few people consuming ethanol, but there are always a few losers in every crowd.

This week I tried to get my green card again. On the first try this week, I was told that only people with an appointment for the same day were being allowed in. Since this was actually my second try, having been turned away last week because the “computers were down,” I didn’t have an appointment for the same day, so they wouldn’t let me in. They told me to come bright and early the next day, so I did. And after two hours of waiting on the following morning, I finally got my green card.

So that’s nine months, four appointments, and €260 to get my green card in France. My American passport was renewed in six days, by mail, for about €100. Cultural differences, I guess. It was so much easier ten years ago, but I guess procedures have changed.
The new card is tiny. It’s even smaller than a credit card. But it has a cool chip on it, which I suppose can be read by some high-tech gadget at immigration stations or police stations. The writing is so small that I had to check it through a magnifying glass when I picked it up (yes, a magnifying glass is one of the many odd items I carry with me at all times). Or maybe I need glasses.

I was surprised that a member of staff at the entrance to the immigration office not only recognized me, but recalled that this was my third visit. Either he has a really great memory, or I look or dress significantly different from the other people in line at the office.

The visit to the immigration office was depressing. Not because of the office itself, which was clean, well-appointed and organized, and generally in good condition (with even a small play area for kids). It was the other immigrants I saw who depressed me. I seemed to be the only American, out of a hundred or so people. In fact, I seemed to be the only person from the Western world, apart from the staff working there. Everyone else was from Africa, the Far East, or the Middle East, in that order. There were a number of pregnant women with babies in strollers waiting in line, some dressed entirely in black (but with faces exposed, since it’s illegal to hide your face in France, and this was a police station). They didn’t appear to speak French. I have to wonder what kind of jobs they expect to get if they are pregnant, with additional offspring already in tow, and unable to speak the national language. Or perhaps their babies were born in France, and that’s their passport to a green card. Then they can just live on the dole, in a country where a month’s welfare payment is probably the equivalent of half the GDP of their home countries.

Yes, I know I’m being uncharitable, but I’m an immigrant too, so yes, as a matter of fact I do understand the position of an immigrant. But there are differences between myself and most of the others I saw. For one thing, I speak French, and I spoke French from the time I first arrived in France. I’ve never asked anyone to speak to me in English. The staff at the immigration office tried to speak English with those who had not bothered to learn French, but apparently some immigrants expect to be accommodated in Mandarin or Swahili, and of course they are disappointed.

When a staff member asked who had come to pick up a green card, people swarmed out of line like stray dogs to a scrap of meat, pushing at each other so much that the staff member had to tell them to behave. I merely observed in amazement. Do they plan to retain this behavior after settling in France?

None of these people looked like political refugees, and none of them looked like people who might be immigrating to France simply because they liked France. And yet that’s why I immigrated. I took a 75% pay cut to live in France, since salaries here are dirt compared to the United States. I learned French. I’ve never received any welfare from the state, and in fact I haven’t even had to use the excellent national health care system, fortunately. But are all these rabble going to get regular jobs and support themselves and contribute to the economy? I have to wonder.
There are some mitigating factors. I saw no Western Europeans in the room simply because nationals of the European Union don’t need green cards to live in France. But I noticed no Americans, either, and no Japanese. The ones I recognized seemed to be mostly from countries where people still live in mud huts and regard clean water supplies and continuous electrical power as futuristic science fiction. Some were apparently Chinese, though, and that was a puzzle. I suppose China still has a massive lower class that is mired in poverty, even if the country as a whole is doing well. Or perhaps some of the Chinese people really do like France. 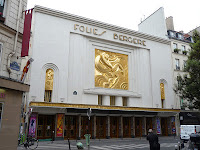 Anyway, it was a relief to get out of that office.

On the way back to my own office, I happened to pass the Folies Bergere, a very famous music hall that goes back some two hundred years. Back to French culture! Manet, Colette, Mistinguette, Josephine Baker, Maurice Chevalier … the list of famous persons associated with the venue goes on and on. A few years ago, I was disappointed to see that the famous Art Deco façade was literally coming apart, but I was very pleased on this day to see that it has been completely renovated, and looks very nice, in bright white and gleaming with gold on the huge Art Deco reliefs. Some of the tacky neon has been removed as well. I liked it. It looks pretty lush on the inside, too, although I’ve only seen photos. The current facade dates from 1926, and was designed by the architects Pilollenc and Morice. The fancy sculpture was made by Maurice Picaud, and supposedly represents the dancer Lila Nikolska.

The Folies Bergere are right next to a lesser-known Jewish quarter, not nearly as famous as the rue des Rosiers to the southeast, but still quite charming. Lots of kosher food shops, which always make me hungry. I had already eaten two delicious croissants after leaving the immigration office, which were so laden with butter that it soaked through the bag the bakery gave me. I was thus able to resist the food on this street (the rue Geffroy-Marie, if you must know). I did end up getting a bottle of vanilla yogurt just before hopping onto the Métro to go back to work, though.