New fashion for the bouquinistes

Bouquiniste is the term applied to a merchant with a small stall near the banks of the Seine River who sells used books, magazines, posters, and so on. In Paris, there are hundreds of these bouquinistes operating along the river, and they are a Parisian institution. I pass them often, and I wonder how they remain solvent, as they don't seem to sell a great deal, even though they frequently have a a fascinating array of old publications and printed material, most of it in excellent condition. I suppose their overhead is low, since they operate out of their green boxes, so they don't have to sell a lot to stay in business.

If you are wondering what I'm talking about, take a look at the short unedited video I've posted here, which shows a few bouquiniste stalls along the river. Bouquin is a French slang word for a book. 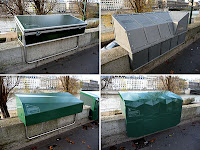 For whatever reason, these stalls are usually painted dark green. The bouquiniste stores all his merchandise instead the stall, and padlocks it shut when he's not open for business. During business hours, the stall is opened and the bouquiniste sets up a chair or to for himself as he waits for clients. Many people look, few buy. But the merchandise is often interesting, and it's in good shape, not junk, even though most of it is used. In fact, I rather wonder how the bouquinistes manage to build up their inventories of printed matter in such good condition. You can often find really cool books, or original concert or movie posters, or various art prints that you can't find anywhere else. It's no surprise that people like to stroll among the bouquinistes to see what they have for sale.

Anyway … the Paris city government issues permits for bouquinistes and helps with the placement and upkeep of stalls, and lately it has been considering an upgrade in the stalls because so many of them are beginning to show their age. It has commissioned four prototypes for new stalls that it has put on display at a certain spot on the river. I've posted a photo here of the four prototypes. I think the first and second (the two prototypes on top) are pretty cool, but they are a bit odd and a sharp departure from tradition, so I suppose one of the bottom ones might be better, all things considered. The Number 4 prototype (bottom left) is probably the one I'd vote for. We'll see how it goes. The bouquinistes are an important and well-loved tradition in Paris, so I'd hate to see any extreme changes made to them.