Food on the rue Saint Antoine, and MSF

I managed to go for a walk recently in the excellent weather of the past few days (before it started to get hot), and I found myself on the rue de Rivoli, which runs roughly parallel to the Seine River from the place de la Concorde almost to the Bastille (it becomes the rue Saint-Antoine just prior to arriving there).

I took the Métro to Châtelet, right in the center of town. From there I walked east along the rue de Rivoli. I noted that the scaffolding that had hidden the Saint-Jacques Tower for years has finally been removed, revealing a nicely restored Gothic monument (the church to which the tower was attached is long gone, but the tower itself is still impressive, especially now that it has been restored).

From there I continued to the Hôtel de Ville—that is to say, City Hall. (Hôtel in French means any large building, not just a hotel, and ville means “city,” so a hôtel de ville is a city hall.) The ice rink was gone, now that warm weather has returned, but there was a small trailer and table from Médecins San Frontières (Doctors Without Borders) sitting in one corner of the plaza.

A lady in a MSF t-shirt walked up to me and asked if I wanted to know about MSF and how they were dealing with malnutrition. Actually, I did know: They use products like Plumpy'nut.® I told her so, and she seemed surprised (I suspect that hardly anyone she talks to has ever heard of Plumpy'nut, but I take an interest in such things).

Plumpy'nut is a remarkable product invented by a French scientist ten years ago to fight starvation in children. It is manufactured by Nutriset, a French company dedicated to products for humanitarian organizations. Plumpy'nut is interesting in that it can rescue a small child from death from starvation by providing all the nutrition a child needs to return to a fair state of health. It contains peanut paste, oil, milk, sugar, and a ton of vitamins and essential micronutrients, all in a sealed foil pack that has a shelf life of at least two years and requires no refrigeration. It's ready to eat right from the pack, and needs no added water or other ingredients. It's soft, like watery peanut butter, so that even a child too weak to chew can eat it. One pack contains 500 kcal of nutrition, and two packs a day for a month can save a starving child, for a cost of about €21 (around $25). Given the ingredients, it's incredibly fattening, but of course that's the whole idea when you're trying to keep a child from starving.

I was very intrigued to see that samples of Plumpy'nut were on a small table in front of the trailer. The manager of the exhibition came over to see me while I was looking at the Plumpy'nut, and we talked. I was able to taste a sample of Plumpy'nut … and it tasted great. Like the peanut butter in a Reese's Peanut Butter Cup, only softer and somewhat sweeter. Children are very willing to eat Plumpy'nut because of its pleasant taste, even when they are not starving, and children suffering from malnutrition adore it.

Somehow I talked myself into pledging a tiny amount to MSF. They wouldn't take one-time donations, so I signed a paper to give them €4.33 per month. That doesn't amount to much, but since my bank account is often empty or negative, I couldn't afford to pledge any more than that—I'm not even sure that I'll be able to cover that amount each month, but I'll see what I can do. It should work out to two people saved from starvation per year.

It occurred to me that the trillions of dollars that the United States is printing in order to allow certain rich people to avoid the consequences of their greed would be sufficient to save all starving children in the world many times over. In fact, one trillion dollars would buy enough food to feed all the starving children in the world from birth through their teens. I guess it's more important to use the money being printed to pay the bonuses of AIG and GM executives. But I digress. 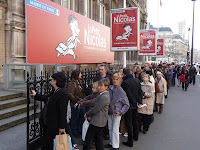 Anyway, after spending some time watching a video inside the tiny trailer that described MSF's work during 2008, I continued walking along the rue de Rivoli. There was some sort of free cartoon expo going on at City Hall, but I'm not into stuff like that, and the line to get in was very long. There's almost always some sort of exposition taking place there, as there's an exhibition hall available for such things. The last exhibition I saw was a 1960s photo retrospective by a celebrity photographer, showing all sorts of (French) teen idols from those days.

There are lots of cool shops along the rue de Rivoli as you move east of City Hall, with all sorts of things on both sides, although the south side tends to have a lot of food shops and cafés whereas the north side is more clothing and other things. I walked on the south side because it's more charming and in the shade.

Of course, in France, we have no problems with starvation: you can get any kind of food you want here, and you can get the best quality, too. Just walking down the rue de Rivoli proves this. Today was a market day in the open market next to City Hall, so there was food there as well (even fresher and more expensive than the other stuff). There were also lots of flower shops … I'm not sure what Parisians do with all the flowers they buy, but they buy enough to keep many florists in business.

There are specialty shops that sell only produce or just fruits or only dairy products. And many butcher shops have large rotisseries out in front that cook chickens all day long—I think they put them outside because the delicious smell that wafts from them down the street brings in customers. By the time you buy the chicken, the tender meat just melts in your mouth, and the butcher will usually throw in some gravy and potatoes that have been soaking in it along with the chicken.

I had not eaten anything so this all made me quite hungry. Rather than actually buy something, which I can't afford (and I'm supposed to be trying to diet, anyway), I walked home to get some exercise, going through the Latin Quarter.

The tourist season is about to start, and I can already see an increase in the number of people in touristy areas. I have no problem with that; everyone likes Paris.

In the Latin Quarter, for some reason, you see endless concerts advertised on every available flat wall space. They are generally classical music concerts, sometimes of famous works but occasionally also of obscure works. Sometimes they are free, often you have to pay some sort of admission. There are so many posters for them, and they are scheduled in such profusion, that I wonder how the organizers keep track of which posters they've put up 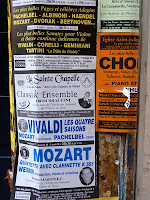 where—but sometimes they even manage to put stickers on the posters when they sell out a concert, so perhaps they have some vast computer back at the office that knows exactly where the posters are. The posters always seem to be in simple black lettering on white or brightly-colored paper, and occasionally there's a grainy picture of the composer whose work is being featured, or the venue. I wonder how many tickets they manage to sell to these things. I couldn't afford to attend even if I wanted to.

After going through the Latin Quarter and getting a huge cup of ice cream at my favorite ice-cream place therein, I walked the rest of the way home. The weather was excellent all the way. Spring is definitely on the way.